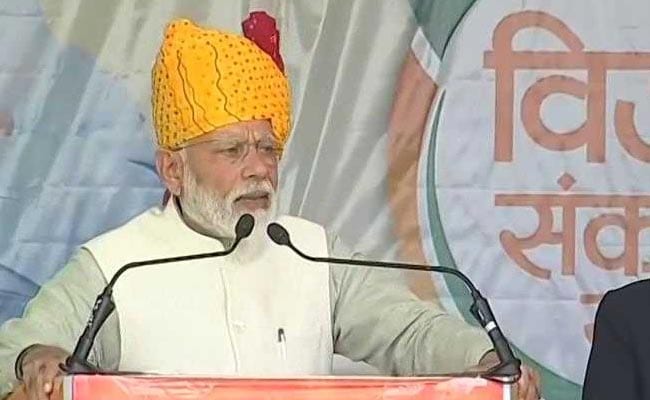 Ahead of the upcoming Lok Sabha elections this year, preparations are in full swing for the two-day national convention of the Bharatiya Janata Party’s (BJP) Kisan Morcha beginning in Gorakhpur from today. It will be inaugurated by BJP chief Amit Shah, while union home minister Rajnath Singh will preside over the valedictory function tomorrow. Prime Minister Narendra Modi too will address the farmers’ rally tomorrow (Sunday).

Here are the Live Updates from 2019 election campaigning:

15:24 (IST)
PM Modi says, “I have extensively interacted with grassroot leaders in Jammu and Kashmir. They are so patriotic. Many have personally told me that they are willing to even lay their lives down for India, put their necks on the line. I told them, “do you know what I want? They replied saying you name it and we will ensure it is done, even if it means we have to put our lives at risk.”
I told them, the first thing I want to see is children and schools being protected. These coward terrorists torch schools. They were burning them down. I told the sarpanches that I want this to be stopped. I told them that when these cowards burn schools, they don’t burn buildings, they burn the future of your children. To this, each and every one of them told me that schools will be protected at any cost, even at the cost of their lives.
15:05 (IST)
“A ‘Kamdhenu Aayog’ is being set up which will look after the safety of cows. It will help implement all the laws related to the safety of cattle in the right way,” PM Modi says in Tonk, Rajasthan.
14:56 (IST)
“When the new government was formed in Pakistan, following protocol, I called up the new prime minister (Imran Khan) to congratulate him. Many people know him as a cricketer. I told him that India and Pakistan have fought a lot in the past. It’s time that both the countries come together and fight poverty, and lack of education,” says PM Modi in Tonk, Rajasthan.
The Pakistan prime minister told me that he speaks the truth, PM Modi adds. “Let’s see if he stands by his words.”
14:36 (IST)
PM Narendra Modi in Tonk, Rajasthan:
“There wont be peace in the world until the terrorists’ factory keeps on functioning like this. Today, the whole world is united against terrorism. “I want to know from the people of Rajasthan, how to teach a lesson to such enemies of humanity?”
“Our fight is for Kashmir, not against Kashmir or against Kashmiris,” says PM Modi.
“In the recent days, some incidents happened involving Kashmiri students. The issue is not that. The issue is that this should not happen in the country. Every child of Kashmir is frustrated by terrorism. They are also ready to come with us and fight terrorism.”
“This is the new India. It won’t sit silently, and it also knows how to crush terror.”
13:05 (IST)
“I have challenged PM Modi to debate with me on Rafale, corruption, job issues,” says Rahul Gandhi during an interaction with students.
12:53 (IST)
BJP chief Amit Shah:
Amit Shah is addressing ‘Sahkari Sammelan’ (Co-operative conference) in Lucknow.
“The development of Gujarat is the world’s core cooperative movement.”
“The Narendra Modi-led government is doing the job of providing more benefits to farmers by cooperatives,” says Amit Shah.
12:47 (IST)
Rahul Gandhi interacts with students:
“When I say government should support education, it means, making bank loans easier, scholarships, adding more universities, pushing enrollment. If you look at all these numbers, they have fallen in the BJP regime.”
“When you look at India, America and Europe, the biggest problem dogging the countries is jobs. No solution is being brought out for the problem and this is the reason why anger is growing. Our current government does not even want to accept that there is employment crisis.”
“I’m absolutely committed to increase higher education institutions in the North Eastern states,” he adds. “Youngsters of this country are the ones who are actually capable of moving this country towards progress.”
12:35 (IST)
“Vice-chancellors these days are ideological people from an organisation. They are not concerned with global vision and feelings of students. They are only concerned with their own ideology and want to use India’s education system as a weapon. It is an insult to students,” says Rahul Gandhi during an interaction with students in New Delhi.
12:10 (IST)
Rahul Gandhi in New Delhi:

“Millions of students take bank loans. How many of your bank loans have been forgiven? We have massive loans of 15 of the richest Indians being forgiven. Why is everything being done for 15-20 people?” asks Rahul Gandhi while interacting with students at Jawaharlal Nehru indoor auditorium in New Delhi.

“Soldiers of paramilitary forces should get the status of martyrs, if our government comes to power they will get that status,” says Congress president Rahul Gandhi.
12:04 (IST)
Prime Minister Narendra Modi lays out his vision for making India a $10-trillion economy, and the third-largest in the world, saying he wants the nation to have countless startups, and be a global leader in electric vehicles.
Speaking at the Global Business Summit, he says his government inherited an economy in complete policy paralysis, plagued by runaway inflation and rising current account deficit.
11:57 (IST)
“We are thankful that you have helped us recognize Kumbh Mela globally. India’s cultural heritage has unprecedented power to attract the world,” PM Modi tells Indian community.
11:43 (IST)
Prime Minister Narendra Modi addresses Pravasi Bharatiya (non-resident Indians) representatives from 190 countries.
10:54 (IST)
“We want to give our people energy security. We want to cut down on import dependence; We want to make India a world leader in electric vehicles and energy storage devices. With these goals in mind, let us re-dedicate ourselves to create a New India of our dreams,” says PM Modi at an event.
10:53 (IST)
Prime Minister Narendra Modi addresses a summit in New Delhi:
“Before 2014, there was competition between ministries, individuals, in corruption, delays, on who can do maximum corruption, on whether coal or spectrum or CWG or defence deal will get more money. We know who were the main players involved in this competition.”
“Today, while India prepares to send a man to Mars, it is also ensuring that every Indian has a roof over his head. Today, while India is the fastest growing world economy, it is also eliminating poverty at the fastest speed,” PM Modi adds.
09:26 (IST)
Covering 11 Lok Sabha seats of Gorakhpur division, the farmers’ rally (Kisan Morcha) will be addressed by BJP chief Amit Shah in presence of Home minister Rajnath Singh and Agriculture minister Radha Mohan Singh, BJP City president Rahul Srivastav said.
[“source=ndtv”]